Last Sunday was a great day for The Last Chance Hotel as they held a superb Halloween Dog show to raise funds.

I took the opportunity to go and visit along with funds raised from tuffet making at festivals. My little dog pictured below came to me via The Last Chance Hotel and I am eternally grateful  - so how could I help them? 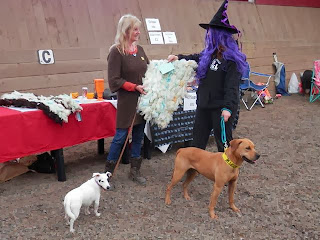 It became clear that I could raise funds and awareness very simply by setting up my large peg loom at festivals and inviting the public to have a go and pay £1 for the privilege - their names go into a raffle and the winner wins the very tuffet made by the festival folk. 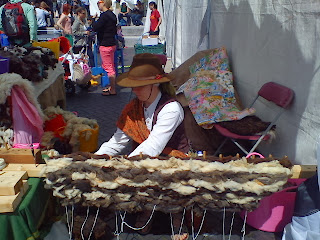 It has worked well and tuffets have been made at Grillstock, The Royal Cornwall Show, Farm Fest and Kehelland Apple Day.


A BIG THANK YOU to all those that have taken part and helped raise funds to this worthy cause!! 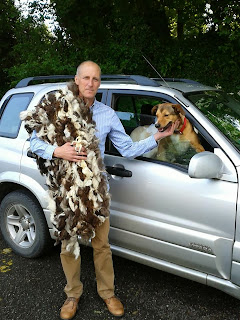 Posted by The Travelling Tuffeteer at 05:12 No comments:

Occasionally you just happen to come across a beautiful piece of music that you have to share - I hope you all enjoy this traditional shepherd's song
http://www.youtube.com/watch?v=9r12xM0tvXg


Posted by The Travelling Tuffeteer at 13:35 No comments:

I was reluctant to leave the Green Gathering where I'd had such a wonderful time, I definitely hope to run workshops there again next year! My next working festival was to be down in Dartmoor in the lovely small village of South Zeal. Firstly a little time out playing music and singing songs at the Sidmouth Folk Festival.
Dartmoor Festival. 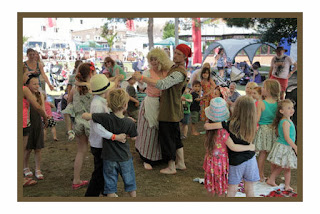 The Dartmoor Folk Festival ran from August 9th, 10th and 11th and is a friendly traditional festival, with the highlight being the Dartmoor Step-dance and Broom-dance Championships!
The Craft area, Craft tent, Sideshows, Demonstrations, Dance Displays and Children's Entertainers are all held in the local playing fields where the general feel is of one of those rare days out in the 1900's when all the family dressed in their Sunday best and attended the annual fair - a truly lovely weekend is to be had here! 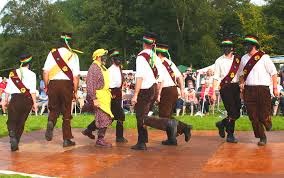 I was fortunate to have a prime view of all the events and to be situated next to a small stream that could be heard tumbling over the stony river bed. The tuffet-making workshops were well attended, I had a particularly memorable time with a lovely family, mum, dad and two teenage boys that all came along together to make a family collection of tuffets!

I would like to extend my thanks to the lovely gentleman that produced some beautiful Welsh Black fleeces for me to use, from his own locally shared Welsh Black flock!

Posted by The Travelling Tuffeteer at 11:57 No comments:

From Farmfest to The Green Gathering at Chepstow!

On leaving Farmfest I made my way north-west to Chepstow for the Green Gathering, previously known as The Great Green Gathering, but now downsized for many reasons and rebuilt in the wonderful grounds of Piercefield Park pictured below. A wondefully landscaped park with secret views and magical places that included a grotto, druid's temple, bathing house and giant's cave,  over the Rivers Wye.

The organisers of Green Gathering plan the festival site around the contours of the park and transform the area into a wonderful space full of craft workshops, fun, music, healing, tee pees, saunas and enveloped with plenty of love! The recycling system is excellent, with sacks for every type of waste - definitely involved a lot of thought as to what you are actually throwing away, which added a new element to this festival. 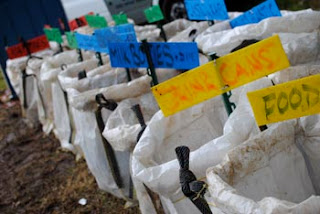 The craft area was exceptional with all stalls/workshop areas set in a wheel formation facing outwards! Such craft people as Oak Clan Forge, Waynes Wood Spoon Carving, upcycling with Rags to Riches and for something even more useful - wild foraging with Carol Hunt and then....................there was The Travelling Tuffeteer! I absolutely loved everything about this festival, the people, the setting, other stallholders and especially our brilliant craft organiser Simon Craig, who incidentally is an amazing coin carver! 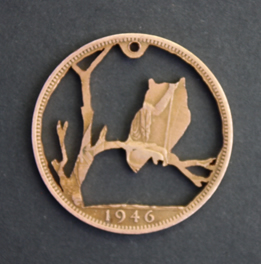 Posted by The Travelling Tuffeteer at 01:56 No comments:

From Buddhafield to Farm Fest -
Farmfest set in Bruton in Somerset is a very different festival to previous Tuffeteer experiences, filled with young party goers and many DJ tents. By far the best tent for me was the dub tent featuring The High Grade Rockers - great music, great company - a festival atmosphere all of it's own - we loved them!
The craft area was set above the music area and distracted quite a few revellers away from the music to attempt tuffet making and also mask making workshops! 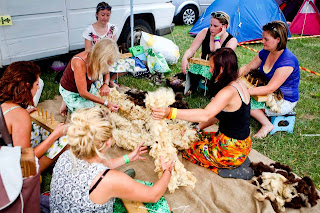 I had the lovely Jaz (in the bright sari) to help and support the apprentice tuffetees and a very fine job she did. It was her first time and certainly won't be her last!! The folk above are selecting their fleece to begin their own tuffets. The weather was great on the Saturday but unfortunately became quite wet on the Sunday but this did not deter the music fans!
One of the highlights of the festival is the annual hat competition - this is so important that it was monitored by the hat police - no hat then you were issued with the badge of shame! I particularly liked Farmer Giles and Farmer Gill complete with the model calf!! 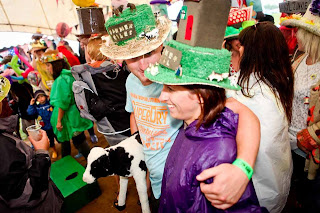 A great festival for cider lovers and party animals!
The downside? - I was deeply saddened to see the amount of rubbish and waste left behind, the fields were littered with abandoned tents, ground mats, sleeping bags, airbeds, cans and bottles plus general litter everywhere. Many people were collecting things to avoid them going into ground fill - a lot of education is needed for these festival goers - anyone out there up for the challenge to design a fun anti-litter campaign that draws people in rather than pointing the finger?


Posted by The Travelling Tuffeteer at 12:42 No comments:

Buddhafield Festival - the fire in the heart!

Each year Buddhafield has a theme and this year it was ' A Fire in the Heart'. Throughout the rituals many people wore something red to fit with the theme. 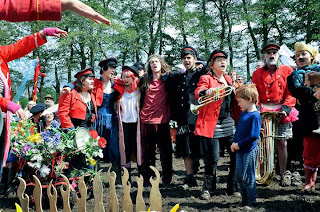 I love this festival, and am not alone - check out the testimonials, due to the absence of drugs and alcohol, 3000 people enjoying each others company in discussion, music, chanting, song and lots of great veggie food and superb Chai tea!!
I was fortunate to run my tuffet making workshops in a beautiful open yurt that provided a very comfortable, natural space that was shaded perfectly from the beautifully intense rays of the sun, which was very fitting with the theme for this year! 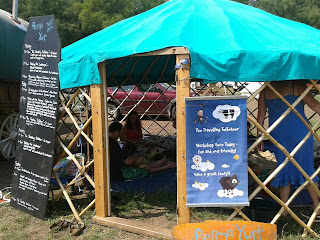 I was lucky to have my beautiful assistant, Hazel, to help me this year - brilliant to be working together with someone to thread the looms, help all you lovely people when things appear to go wrong - but they don't really as every tuffet is unique yet still creates that perfect 'Bottom Heaven'! Workshops were overflowing with budding tuffetees sharing the love of true eco-friendly woolly goodness! 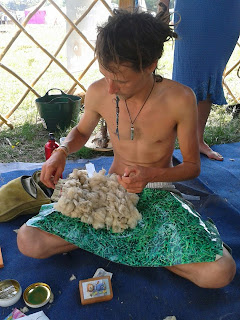 Get into the Spirit ... but Leave the Spirits at Home

'Buddhism is about getting out of our head. Into the body. Into the abundance of the present moment. Away from stale thought loops that regret the past or worry about the future; away from a dulled, dumbed down experience; away from avoiding parts of ourselves, into the full vividness and beauty of now'.

Posted by The Travelling Tuffeteer at 12:18 2 comments:

Ground-breaking news - I now have festival vouchers available for £5 or £10 -so if you have the overwhelming desire to make your friends/family exceedingly happy and extremely comfortable as you introduce them to the world of 'bottom heaven' with an eco-friendly sheepy tuffet, then do come and find me at one of the forthcoming events! 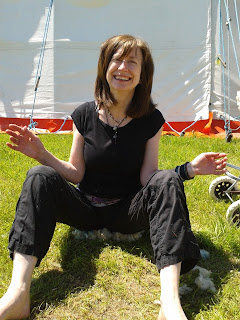 Posted by The Travelling Tuffeteer at 23:56 No comments:

Oh, for the life of a Tuffeteer!

The Travelling Tuffeteer
I am available for festivals, fetes, country fayres and craft workshops to demonstrate the art of tuffet making with the option of making and purchasing your very own tuffet. The tuffet is a lightweight, woven 'cushion' made from eco-friendly sheeps wool and is guaranteed 'bottom heaven'. The Travelling Tuffeteer has come into existence as a result of a life-changing experience. Whilst in Ireland I encountered my first 'tuffet' - a wonderfully comfortable seat pad made entirely of woven wool. After in-depth research I discovered the secret of this wonderful experience of 'bottom heaven' and managed to secure myself a couple of fleeces with which I produced my first tuffet. It seemed selfish to not share this comfort with friends and other like-minded people and so began the creation of The Travelling Tuffeteer and the slogan "Bottom Heaven since 2011" The tuffet is organic, water resistant due to the natural lanolin and is deliciously sheepy!! I will be happy to take on-line orders, details of Tuffets to follow, Contact e.mail address: tuffets@cornwall.ac.uk

Proud to be a Partner of The Campaign for Wool